Just a quick line to say that I am still here and will be updating real soon.
my hardrive on my laptop is full and I need to copy off some photos and delete some files so that I can download my photos.
But I have been just too busy to have time.
Hopefully get it sorted tonight.
Cheers George.
Posted by George at 13:31 No comments:

Before I had time to enjoy my weekend it was already over!
I am getting in need of a break.
I have have had an issue with Mondays ever since I was a very young child and I think its fair to say that I was never the first child into the school grounds on a Monday morning.
This unfortunately has followed me into my adult years and unless there is a really cushy job to go and start the week with, then Mondays can be a real drag.
Today was a little different though as my dad was supposed to be going away on the helicopter on the first flight.
So I was up early at 7 to get some breakfast and head off to take my dad up to the airport.
On arrival it turned out that the helicopter had a technical problem and wasn't flying until further notice.
So I took dad home and awaited further information.
I then took the boys to school and somehow we ended up being late to school by a minute or so, not too sure why....
Then it was off to work and today's job was at the Bylet Guesthouse where I had to do a hallway,bedroom and toilet in carpet.
The job was to take me all day, with a few distractions such as ferrying my dad up to the airport once more to find out that they still weren't flying and take him home again ( we cancelled the whole thing after that)
And also I picked up one of my little skiffs that had been moved in yesterdays clean up of the slipway area at Old Town.
After finishing at the Bylet I had a couple of calls to make and then it was home for tea.
The day was a rather grey affair offering little in the way of photography, but I did spot a Gibsons photo on the wall at the 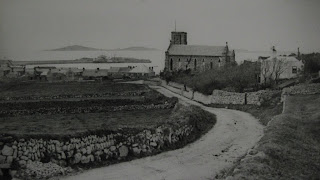 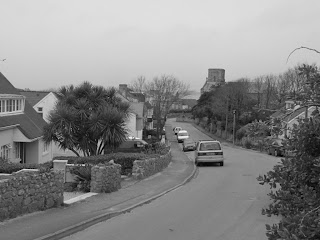 ographed and had tried to replicate again today.
Old photo is copyrighted by Gibsons of Scilly and I thank you for the use of the image.
I think that the original must have been taken way back in the 1800's probably between 1860 and 1880 or so.
Not sure exactly but the quay is not at its full length so must have been along time ago...
The original is hard to replicate exactly as the position of the photographer in the 1800's was inaccessible to me today, with it being somebodies' garden now! Mrs Wilsons garden to be precise!
And that was Monday, tomorrow sees me returning to St Martins but only to do 2 bedrooms so I should be home for around lunchtime and be able to continue with my St Marys 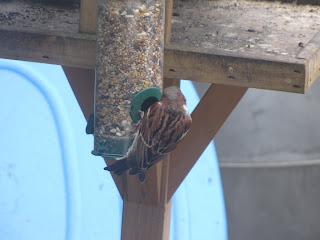 So after a busy week I was glad to not have to work today.
I almost did but managed to get out of one job and kind of ignore the other!
I was awake last night just at the time when the clocks went forward having fallen asleep on my comfy sofa.
So I was glad that Ben woke up at 8.30 this morning allowing a good bit of sleep, clever boy!!
We opened to curtains to reveal a stunning day outside the window.
It was unexpected as the forecast I had seen said something entirely different.
I took the opportunity to get my work clothes in the wash ad out on the line, before heading up to the Garrison to watch the final football match of the season.
It was a good match with it being only 8 a side,the score was 7-6 in the end with the half time score being 5-1 to the losers.
I can never remember what team wear what kit but the reds won today, so it was either the Woolpack Wanderers or the Garrison Gunners!
After the match finished we stayed up to have a kick about on the pitch and have a play in the play park. 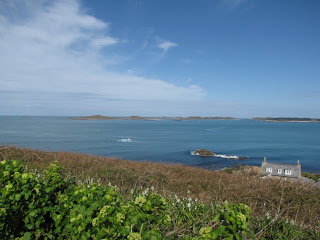 I took a couple of pics on the wa 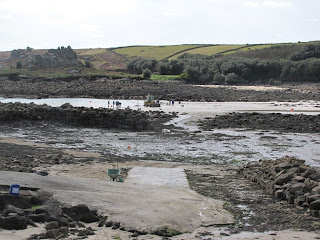 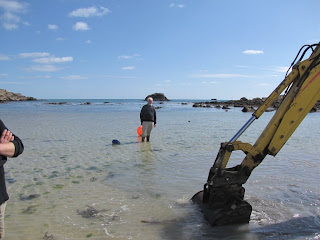 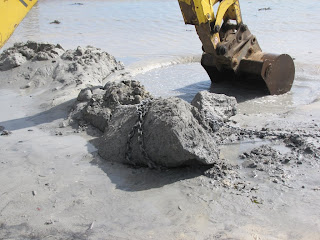 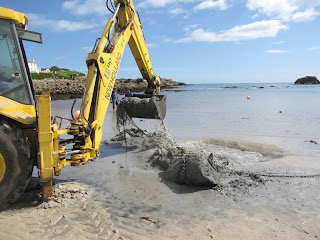 wn the hill, before heading down to Old Town beach where the bay association of boat owners were setting about checking their moorings and replacing old chain where necessary.
It looked lovely down here, but by now a chilly westerly had started and if the sun went behind a cloud it was a bit chilly.
Whereas up on the garrison it was T-shirt weather while playing footie...
After the trip to the beach I decided that some well deserved relaxing time was called for so did very little for the rest of the day.
Only had to pop into town to get some milk for breakfast and pop into see my dad this evening.
so a nice relaxing day in the sunshine.
Ideal!!
And it looks as though the weather for the week is looking ACE!
Perfect, might get the boat in......
Posted by George at 23:00 No comments:

Saturday started well with a slightly later start of 9 o clock.
I went to the quay so see what the final Gry for a week had delivered, and I was happy that everything that I had ordered had arrived.
So I loaded up the car with the 10 rolls of underlay and dropped them into my garage.
Then it was off to do a hall stairs and landing at Treglesyn in Rams Valley.
This took most of the day and I had a few other calls to make and a site meeting at the Town Hall with my mate Mark from Wright Construction.
I will be doing lot of tiles in the old reception area which will now be office space.
After work I arrived 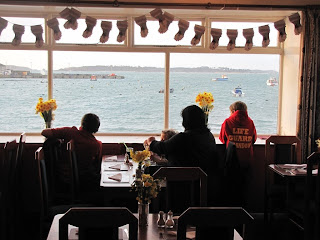 home where we quickly made a decision that we could go out for tea.
We went up to the Scillonian Club and sat in the Lyonesse Bar overlooking the harbour.
It was a good honest bit of grub and the view was just lovely.
We sat and enjoyed our tea and watched the sun going down.
I can recommend a club burger!!
Some pics here from the Lyonesse bar, including a flock of Turnstones taken 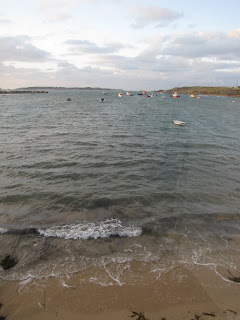 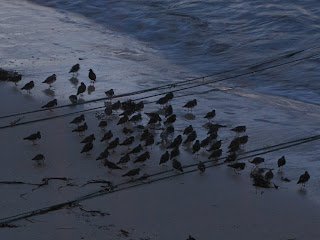 at dusk through the window.
All in all another good day with another job nearly completed.
Posted by George at 15:03 No comments: 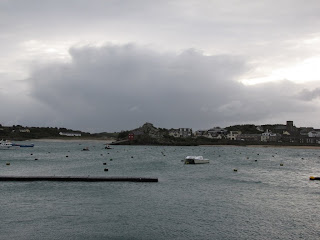 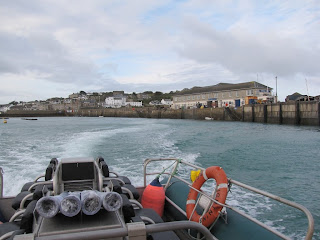 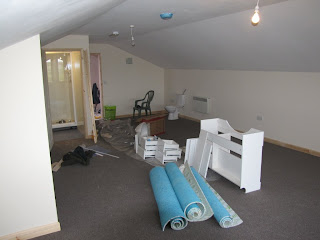 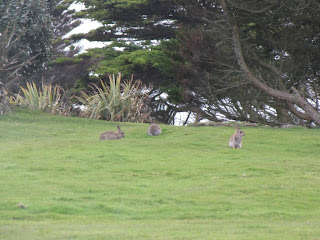 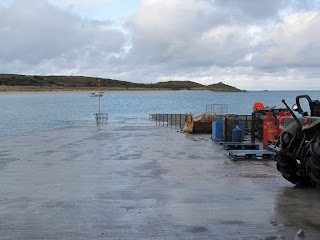 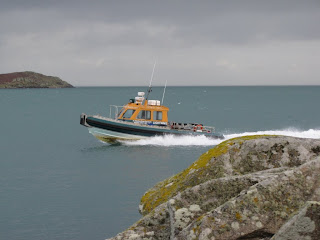 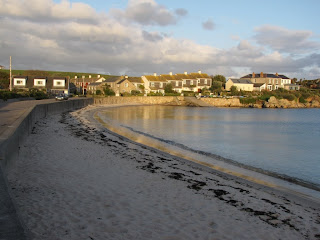 So well it is all a bit of a blur now, but i'll try and catch up..
Friday started very early again with little Ben waking at 6.30 again.
It was ok though as today was going to be an early start anyway,as another day on St Martins was on the cards.
I needed to finish off what I started on Thursday, the rooms were so big that even a 5 metre wide carpet wasn't enough to do the width of the room in one go and I had to put in a join down one side
of the room.
Joins in this particular type of carpet are quite tricky and it took a while for me to do them.
When that was done I set about doing the 4 bathrooms.
I was quite lucky because the bathroom were clear of all bathroom fittings such as toilet and sinks,etc.
This makes life so much easier as then I only have to cut straight lines around the edges of the room.
So it wasn't too long before I had done all 4 and it left me time to finish off a job that I started weeks ago and just needed a small join finishing.
A very productive day on St Martins.
After the day of work I was very tired and was feeling a bit under the weather, so I didn't do anything at all after I got back to St Marys.