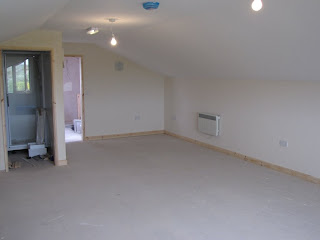 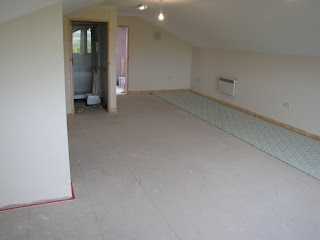 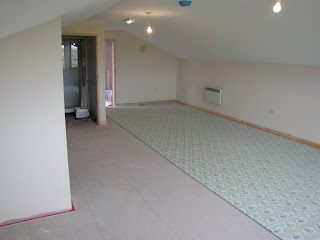 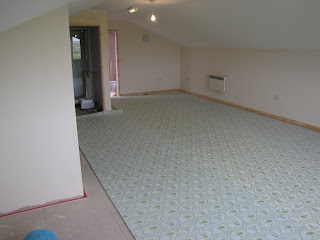 Had a good day up on St Martins today to do two very large rooms that are going to be used as staff accommodation at Churchtown Farm.
Going back tomorrow morning at 7.45 to finish off and do 2 bathrooms.
A busy day but not too different from any other at the moment really, i'll let the 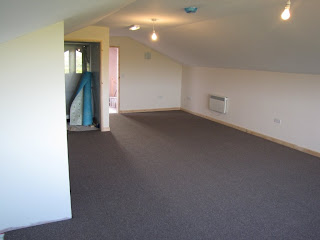 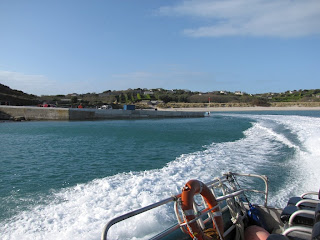 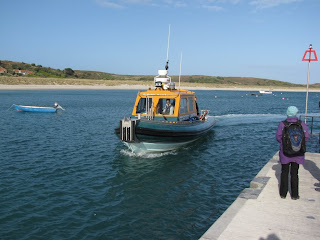 Well it was another start with little Ben waking up at 6.30 again.
I'm not really what you might call a morning person, well at least not until I have had my Frosties!
After that I'm not too bad..but 6.30 is about an hour and half to early for me!
The second morning in a row certainly wasn't welcome particularly as I was into bed late last night after the pool night..
It worked out OK though as today was always going to be a long day.
I was fully booked today, but was persuaded to fit in another job as well.
So I left the house at 8.15 and went off to work.
First job was a kitchen vinyl,through and hallway and into a WC in one piece.
If that sounds complicated then you will be glad to know that it was!
This job took nearly all morning and just about left enough time for a quick job in 1 Golden Bay where I needed to put down a metal door bar.
Then I was off to 4 Well Cross to do a bedroom carpet.
With that done I had to pop back to 1 Golden Bay to stick down the bathroom vinyl that I fitted last week, and finish the job off.
By now it was 3ish and time to head down to the pitch for footie practise.
It was a fine sunny afternoon and very pleasant conditions for football.
We had a good hour session that finished with the usual match.
I think everyone had a good time today, the weather certainly helps as does the pitch that has finally dried out after all of Januaries rain!
After footie we needed to go to town and get something for tea.
After tea I still had more work to do in 4 Well Cross, a hallway had to be done as I will be on St Martins for the next 2 days.
It took me about 2 hours to do and I finally finished just after 9.
So in all I'm pretty tired now, I have taken not even one picture today as I just seemed to be chasing myself all day today!
Definitely have pics tomorrow............
Posted by George at 23:15 2 comments:

Today started early after being woken at 6.30 a.m by our youngest son who clearly thought that we should all be awake if he was.
We will be buying a blackout blind for him VERY soon!
I used the extra hour or so to lie in bed and listen to Steve Watts ramblings on Radio Scilly, the first time I have had it on when the programme " Scilly Sunrise" started!
a needed to go to school to ask the teacher or someone a question so took a couple of pics on the way. 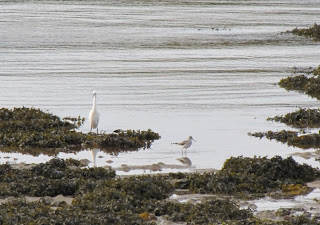 The usual suspects of Old Town Bay were present, a Little Egret and a Greenshank.
The Heron was about but I didn't spot him while I was walking.
After school drop off I went straight off up to Mincarlo to do the landing carpet.
It was fairly straight forward but took a while and I didn't really get done until nearly lunchtime.
It did look good though..
Then I took a trip down the quay to see if my 2 missing rolls of underlay were there and there they were.
I picked them up and headed for Wingletang Guest House to do a bedroom carpet.
There floor was a bit ropey and needed some attention before putting down the carpet.
I set about fixing the floor and left some special rapid hardening leveling compound to dry and went to lunch. 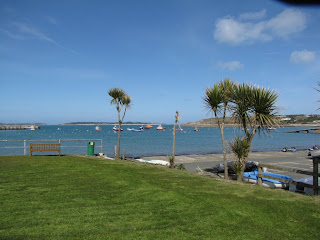 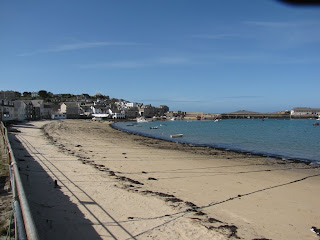 By the time I had had lunch and got back to work, the leveling was more or less dry so I could get on with the job.
I had it all don 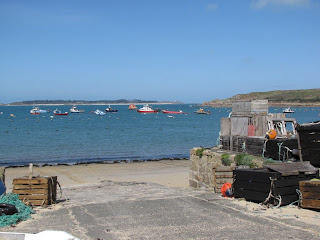 e by 3ish and headed off to 3 Well Cross to do a bedroom and hallway.
This was fairly straight forward but not a straight wall in sight so took a while to get fitted.
I finished just about 6ish.
A long time spent on my knees today and lots more to come...
I have decided that once all my holiday lets and B&Bs' are done that I am definitely taking a few days off.
Probably to try and get my boat in.
Something to look forward to!
Tonight was pool night and we played at home in the Atlantic Inn.
We played the Mermaid "B" team and won 7-2.
It was a good evening as usual and as always nice to get out with my mates for a drink.
Tomorrow brings a mixed bag of work and football practise too..
Posted by George at 23:33 No comments:

Well I reckon I have now less than 2 weeks until this madness is over.
I am still flat out at work doing holiday lets and bed and breakfast places.
Today saw a real panic when a I realised that I hadn't ordered the carpets for a job that must be done next week.
Normally a week is enough time to get a carpet here, but this particular company takes a bit longer.
So ok it was going to be arriving a bit later,no problem.
Then we realised that the Gry Maritha will be out of action next week for her annual service and general check up.
Which means that the Scillonian 3 will be providing cover.
Only as it is the Scillonian all deliveries have to be at the quay at 8.a.m or you don't get your stuff.
Not easy trying to get that sorted out, but my friends at the Carpet Warehouse in Penzance have managed to sort it all out and it will all be fine.
The day itself was fairly straight forward with a dining room to do at the Bylet guesthouse and after lunch a flight of stairs to do at Minc 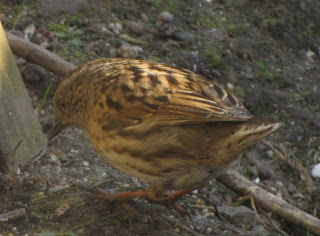 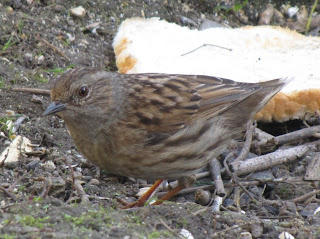 No pics from today other than a couple of a Linnet that I have had in my garden since I moved in over 2 years ago.
He's a happy but timid little chap that likes to feed on tiny bits of what the sparrow,thrushes and blackbirds leave behind.
I hadn't really noticed Linnets generally since I lived here.
They are pretty little brown birds and at present we have 2 in the garden, so I am assuming they are a couple as they follow one another around.
Hope you enjoy the pics, I certainly enjoy watching the birds.
Posted by George at 23:41 1 comment:

We went out for lunch on Sunday at the Bishop and Wolf to celebrate Mothers Day.
12 of the family all went along and we all had a great time.
The food 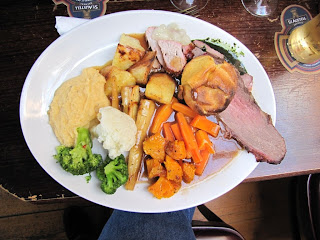 again was top notch and this time we even had dessert!
Here are a few pics from lunch..
After lunch we went down to Carn Gwarvel pitch and played some football and mucked about on the skate park in the sunshine.
It was a lovely day and after the skate park we all settled down to watch Liverpool thrash Aston Villa 5-0!
So a good day again on the whole and 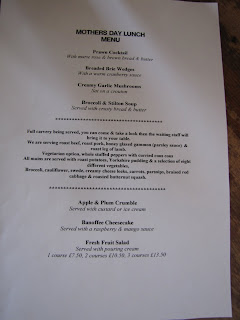 was over all too soon, now I'm back to work for what will be my penultimate