Just too busy this week

Its been a busy week with lots going on.
Plenty of work and calls to sort out and I haven't had much time to get on here to update,sorry.
I will get some pics off my camera today and get some on here later on today.
Its been a funny old week being the first week after the holiday it was always going to be manic on the work front and it sure lived up to my expectations, only most of the carpets that should be here didn't turn up which made choosing which jobs to do first a whole lot simpler!
Friday I went up to St Martins for the day to do a couple of jobs and a measure.
It went ok, the first job was a lounge carpet in a holiday cottage at Signal Row.
I needed to put down grippers and underlay before fitting the carpet.
When done it was time for the carpet, when I had unrolled it it was 4 inches short, which left a dilemma of what to do.
I could join it or turn it around and put in a metal doorstrip or do the right thing and offer to replace it..
Obviously I offered to replace it as it appeared to be my fault for not measuring correctly in the first place...I must have misread the tape measure.
Its the first time I have done this in my 17 years of carpet fitting.
So I have a nice carpet for sale if anyone is interested!
Then I went on to do a measure up at Churchtown Farm.
Followed swiftly by down to middle town to do a kitchen vinyl.
I was well looked after at this job and keep happy with an endless supply of tea and a huge wedge of yummy sponge cake.
Its a hard life I know!
It wasn't long before it was time to catch the boat home and off I went.
I came home and sorted out the last few bits of work for the week and did a couple of orders, and then went for a stroll down to my old house where I grew up.
It was great to go home I haven't been down there for a few years and it was good to see some of the things I recall from my childhood still present, like the rope swings in the pine trees and a daffodil garden that I planted with my sisters when I was very small!
I have some pics of the views from here and I think they are some of the best on the islands, but then it was what I saw every day for years so maybe that it is the memories of the views rather than the view itself that i so good!
Any how I have one last carpet to fit for my good friend Sam, so I'd better get going!
I'll get some pics up later today.....
Posted by George at 09:46 No comments:

A couple of days and a Helicopter.

Well Tuesday was something of a blur, particularly as I sit here trying to recall what I actually did!
First thing was my second son Brandons birthday, so we were awake early for the inevitable present and card openings and then off to email Radio Scilly for a birthday announcement (Thanks Keri!)
It was off to school for the boys, not always ideal on a birthday but they were happy as they were ha 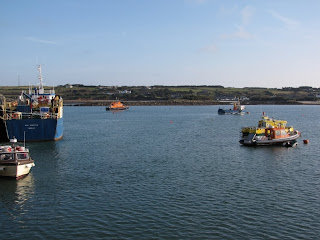 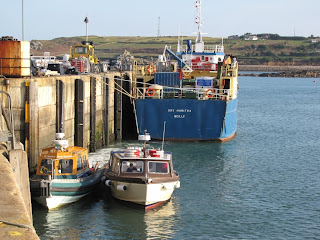 I went off and did some work, but to be fair not much got done due to another load of phone calls to make and receive and also my head was still not really back into the swing of it all!
Fortunately I finished the vinyl that I needed to do and a couple of other small jobs and finished in time for the birthday cake and tea after school!
We had the family around and when they left we had a quick bit of tea and got the boys off to bed and then I was out to play pool.
It was a good night with our team taking on the Porthcressa Team playing at the Scillonian Club.
We won 8-1 and I did win my singles and doubles matches!
So that was Tuesday...weather wise a calm day with sunny spells, I got a couple of pics down at the harbour to remind myself of the lovely start that it was! 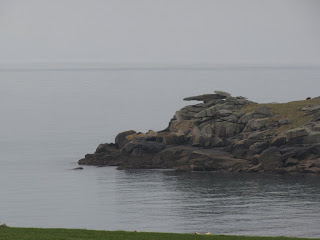 So the day started more or less the same only today it was an email for the outlaws wedding anniversary instead of a birthday!
I went off to work full of enthusiasm only to realise that I had nothing booked in to do!
So I thought that it was probably time to get myself organised and went back home to sort out lots of jobs and book in what I could with customers.
This took most of the morning as I seem to be chock a block with work!
Finally I escaped out to Westford House where I am doing all of their en suite bathrooms in new non slip vinyl.
A fiddly job that I have to admit have been putting off just a little as there are 7 pieces to fit and bathroom vinyl is not my fave job!
I managed to get 2 done today before it was time for footie practise with the primary children.
Our pitch is still very boggy in places, so we marked a smaller area than normal in order to maintain the grass as best as we could.
It was the first footy I have done in ages and I really enjoyed it.
I think all the kids did too..
So then it was home for a nice bit of tea and then settled down to watch Liverpool take on Real Madrid.
Having been converted into a Liverpool fan by my eldest son it was good to see them come away 1-0 winners on the night with an away goal to take into the second leg.
A good day on the whole and I feel so much better in myself having sorted out just how I might be able to get my mountain of work done!
Oh by the way...on the way home for lunch I spotted a helicopter in up at the airport, being a grey old day it seemed a good photo opportunity.
I got there just as they appeared to be preparing to leave, I got my pics and was just about to go when they fired up the engines...I went back to see them fly away and decided to video clip them 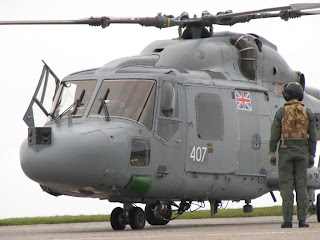 leaving and I am so glad I 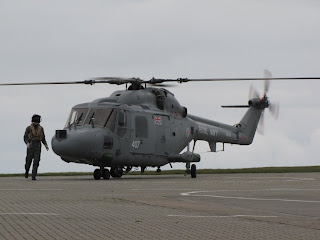 did.
The heli lifted just a couple of metres from the ground, appeared to give me a bow and then left the airstrip hovering very low before turning down the entire runway and following it right to the end before lifting sharply to 1000 feet or so in a matter of seconds.
Very impressive. 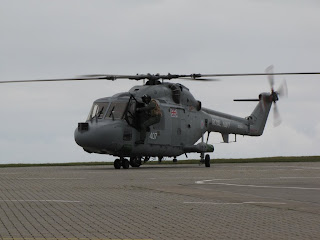 I'm sure the pilot did it just for show, I like to think that he did it just for me!!
The video is going now up onto you tube and should appear on the sidebar here soon!
I think the helicopter was a royal navy lynx. Must have been from RNAS Culdrose.... or maybe a nearby

By the way if you click on the image it opens a bigger photo that you can see much more detail, this is the same on all of my pictures on the blog,here and Scillywebcam,images can be used for your own personal use or if published elsewhere please credit me, George Kershaw with the picture and let me know where you have used it.
Cheers George.
Posted by George at 22:43 No comments:

First day back to work, Harbertonford 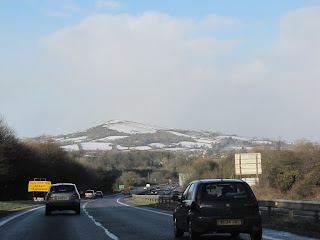 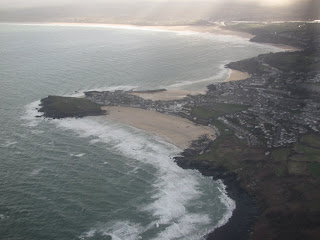 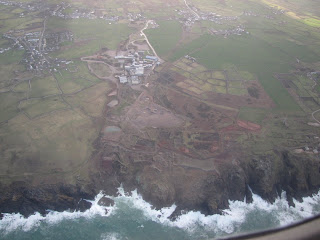 Today was the back to reality day.
After a relaxing Sunday and a fantastic holiday,it was a struggle getting my head around the mountain of work that needs to be done.
It seems I have told everyone to give me a call when I get back from my holiday and sure enough I think they all did today..
So i spent allot of time on the phone today.
I did manage to complete my first job which was a hall and lounge carpet/
The job went well and was nice to get back to work despite the idea of it!
There was no one in the house, so I was able to get my phones mp3 player going and I had a good sing along with myself as I w 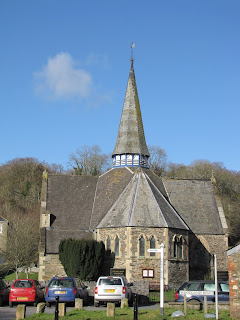 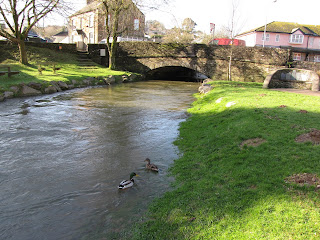 Its fair to say today was a busy day although I kind of eased myself into it rather than going head first,flat out!
It seems that the jobs are arranging themselves with some people being in more need than others to get their carpets done.
Obviously holiday lets and b&b's get the priority with domestic jobs having to wait for a few days or for a space in the schedule to get done.
I think it will all work out ok, but I won't be taking on any more work now unless it can be done in April or after Easter.
I didn't manage to take any pics of Scilly today, so I have put on some pics from my holiday starting with the flight ot Newquay from here and Geevor and St Ives.
Then snow at South Brent,Harbertonford bridge and church.
Also a pic of our hire car a Jeep Patriot which is a SUV with a 2litre VW TDI engine that was actually really good.
And I just had to put up a pic of the Proven wind turbine that I spotted outside the National Marine Aquarium in Plymouth for my mate Paul up on R 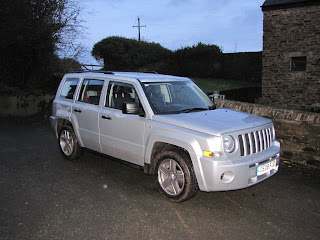 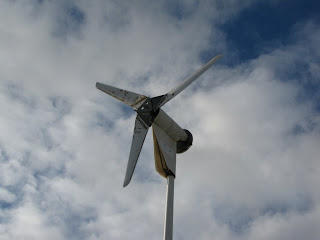 much better model on his croft.
I shall post more pics from my holiday as I sort them out but probably as a separate holiday post more for my own record as much as for any one else's pleasure, although I'm sure someone out there will like to look at the pics!
Posted by George at 22:40 No comments: 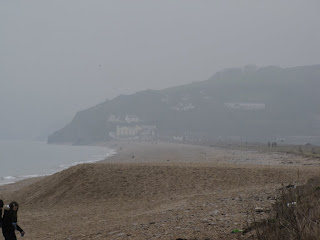 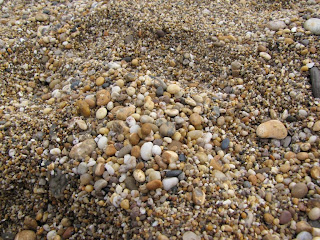 650,000 tons of shingle to create Devonport Docks.See below sign for more deatils... 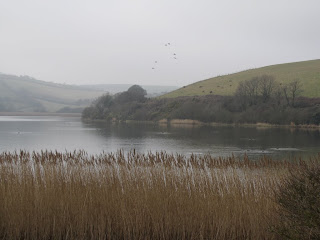 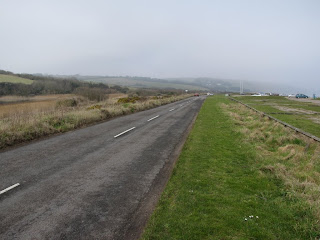 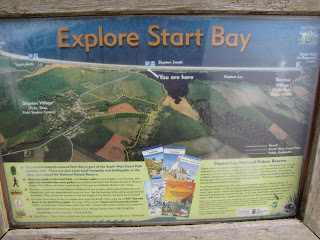 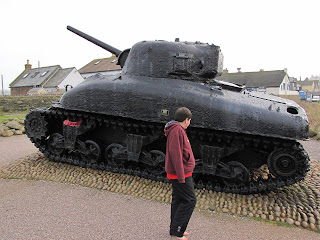 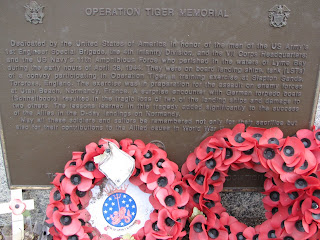 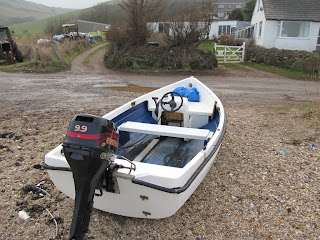 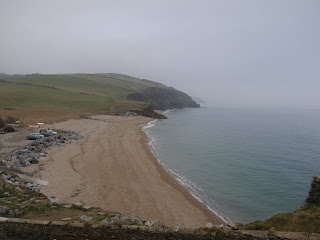 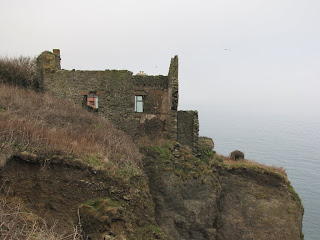 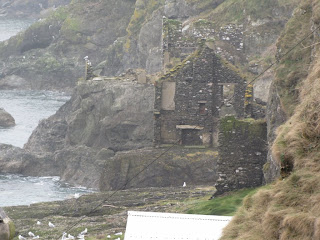 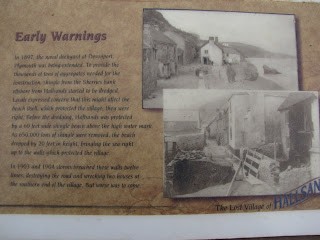